In the continuous story of Live Tiles I wanted to write about updating the Application Tile by using a PeriodicTask. This is a very nice way to update the tile without having to make use of a remote service. However, the PeriodicTask needs to get some data that is available in my application. The way to go is to store that data in a file in IsolatedStorage in the application and have the PeriodicTask retrieve the data from that same file, since it has access to IsolatedStorage.

Since the application might update data that the PeriodicTask needs and since both of them are executing independently from each other, it is a good idea to protect the data by means of a synchronization object. The documentation for Background Agents even suggests using a Mutex for this purpose.

And this is where the fun started for me. I tried to create a Mutex inside my application, and time and again I ran into an issue. The Mutex object was clearly unknown in my application, even though I did add a using directive for System.Threading. 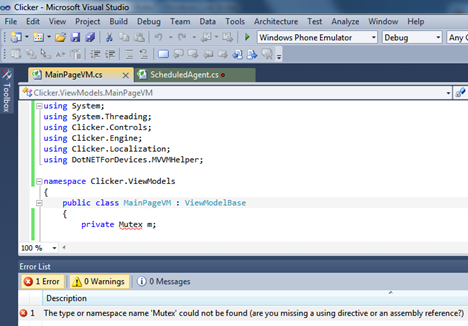 It took me quite some time to figure out what was going on here, especially since the PeriodicTask that I was perfectly capable of using a Mutex. Both are Windows Phone projects, both have access to more or less the same namespaces. And yet, there was this difference in recognizing a Mutex object. 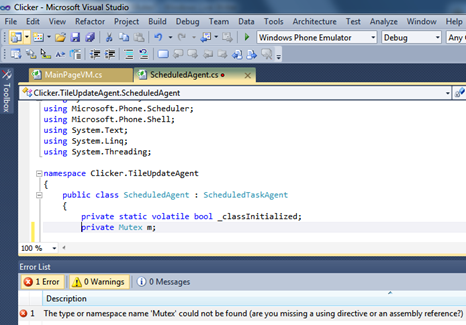 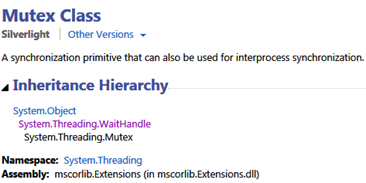 Even though I was reading the above documentation several times, I didn’t get it. I know I had access to the System.Threading namespace and I still could not use the Mutex. So I started searching for a solution on the Internet and I was not really successful in that, although I got the indication that folks are using Mutex objects in Windows Phone Mango applications. All in all I guess I wasted at least one hour when I decided to compare references to assemblies in both the application and the PeriodicTask projects. Here I found one subtle difference. 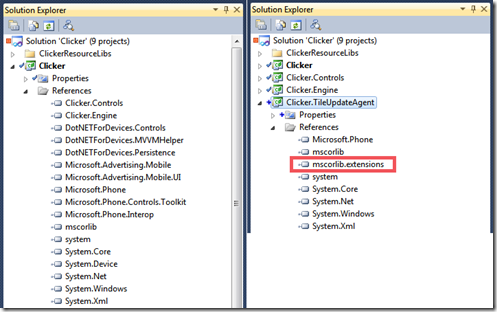 The difference between the two projects is a reference to mscorlib.extensions. After adding a reference to that assembly in my application’s project, I could use the Mutex. Of course it simply comes back to reading the documentation, because it does indicate that the necessary assembly is mscorelib.extensions (in mscorlib.Extensions.dll). Ignoring that one little sentence delayed me for at least one hour. Hopefully you don’t fall in the same trap.